>It takes a lot to truly get under my skin: I’m patient, give people the benefit of the doubt, and I’m generous. But once the line has been crossed, it’s final with me and though I’ve mastered the art of letting things go, I’ve yet to see the real benefit in forgetting. Forgetting means leaving oneself open to repeated offences and I like to think I learn from my lessons.

In this digital age of friend collecting, it’s a curious thing that we suddenly share intimate details with hundreds of “friends” on Facebook and thousands of “followers” on Twitter, isn’t it? Information we likely wouldn’t share with our closest friends, but we’re happy to display upon the wide innernets. In my case, the majority of the nearly 600 “friends” I have on Facebook reside on a limited profile list that affords them a very narrow window into my life. And of the more than 3000 people who follow me on Twitter, well, there are very few I consider actual friends. But they do me no harm in being connected, so I generally leave my lists alone.

So what happens when the line becomes blurred between online acquaintance and actual friend? It happens to me often. In fact it’s this cross-pollination of my “real” and “online” worlds that has led me into some of the most rewarding friendships I’ve had in decades. But there are always times when those criss-crossed worlds become negative. And it’s ok to break up. 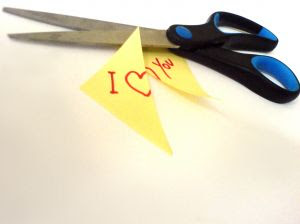 Just this week I had an unfortunate experience with one such online acquaintance who mistook pleasantries for friendship, and tried to leverage this relationship into guilting me for calling them on something negative they did. Trust me when I say that it did not go over well for them, and the repercussions of their actions will ripple for a long time forward.

I’ve found myself in the past few months very intolerant of these kinds of unacceptable behaviours from my online community. If a “real” friend were to spew ignorant, sexist comments, I’d call them on it, so why do we stay silent when it’s an online “friend”? We tsk-tsk about grotesque Facebook updates, we snicker about inappropriate attendance at events, we sit by and let people be douchebags…why? In the name of some ill-placed politeness? When someone crosses my social boundaries in “real” life, I adjust my relationship with them accordingly…and therefore I do the same online.

Just as in the grand “old days” pre-digital friendships, not everyone is a friend. Some are acquaintances, some are merely faces we greet in passing, some are great contacts and the very special become true friends.

We don’t have to always agree, but we’re also not stuck with each other when things go sour. There’s no obligation for me to allow someone an intimate glimpse into my family through Facebook, and no reason for me to follow the tweets of someone I find ridiculously rude.

And I’ll admit it: hitting that “unfriend”, “unfollow” or “block” button sure feels damn good. Go ahead, give it a try. You know there’s deadweight on your list that you’re dying to dump.