Recently, I started reminiscing with a grade school friend over Facebook about the things we did in elementary school. We had poofy bangs, and fluorescent socks, listened to Paul Abdul and wore leggings with long sweaters. That conversation started a long string of thoughts, and I thought about all the things I “used to” do. So I chatted about it awhile on Twitter, and it was a thrill to see everyone’s thoughts in the #iusedto hashtag stream. Many were funny, many were sad, all were interesting.

There’s a melancholy feeling when we talk of things we used to do, isn’t there? Like somehow times were once better than they are today, or that times were harder and those old feelings emerge fresh to hurt our hearts a little. But to me, remembering is the only way we can truly appreciate our journeys. In looking back, I find happiness and contentment because I can where I’ve come in my life. So here’s my list of things #iusedto do.

– listen to the Mini Pops on repeat; so often, in fact, that my mother took the tapes (!!) away from me, thinking I should instead be listening to Raffi

– have two best friends who were, coincidentally, both from Newfoundland from places near where my Mom was born

– bite my nails till they bled

– absolutely love Disney’s The Little Mermaid, and collect memorabilia from it

– want to be an English professor

– suntan using babyoil– be a Brownie, then a Girl Guide, then a Pathfinder and then a Junior Leader in the Girl Guides of Canada

– play the flute in my high school symphony

– have a crazy crush on a guy named Paul H. who, if I ran into him today, would probably still give me the giggles

– date total jerks who told me stuff like, “Real women have long hair”

– smoke a pack a day

– shudder at the thought of eating oysters, but now I love them

– write for my alumni magazine

– think being a bitch was the best way to protect myself

– care what other people thought of me, to the detriment of my happiness

– live in a teeny apartment in Toronto

– blog before anyone really knew what the word “blogging” meant

– have a blog that was followed by more than 400 people, but hated the “fame” and shut the blog down

– work at Kernels popcorn, Jean Machine, Northern Traditions, a silver jewellery kiosk in a mall, Aldo shoes, as a telemarketer for a vacuum cleaner company, as a fundraiser for my university, as a tour guide for my university, as a sales person for a corporate greeting card company and as a conference developer for a company I absolutely loathe now

– have my nose pierced

– take a lot of self-indulgent silly self-portraits, like this: 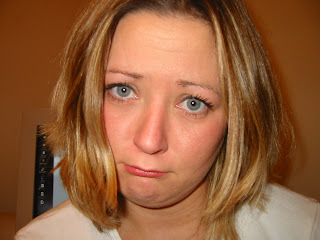 – have a hard time letting go of shitty friends

– be terrified of public speaking

– think I’d never make anything of myself

– spend the majority of my life online

– write a lot of posts that were self-indulgent like this one, and man, it feels good to wallow in myself sometimes. Ha!

Sometimes it feels really nice to remember the useless stuff, you know?

My friend Jen has blogged about her list (the very coolest, nerdriffic techie things, so rad!), and if you blog about your #IUsedTo list, I would LOVE you to let me know so I can follow up. You can also tweet it using the #iusedto hashtag and tweet it, if you like.